C1-All these password changes. A trained monkey could do them.
Me: What? your doing them... want a banana or something?
Posted by THOTpolice at 8:49 PM No comments:

Adventures in the Kitchen

Since I had the day off and was catching up on a few loads of laundry I figured it would be a good time for a big breakfast.

Today's "science" is to see how potato slices faired when cooked right after bacon in the frying pan.

Potatoes where sliced  >1/4in before pan frying.Only thing added was a pinch of salt.
Eggs where also cooked right after more bacon. Tried for over easy but ended up with scrambled.

Lessons learned:
Prepare your potatoes before cooking bacon. Successful smoke detector test.
Microwaving for a minute and a half, then finishing in the pan produced superior results.

Not too bad only burned two slices of bacon. Everything else turned out as expected or better.

Posted by THOTpolice at 5:43 PM No comments:

We got a bunch of plastic ducks from a vendor. They are pretty much useless paperweights. Several are now lined up on one of the cube dividers. Boss was commenting on them.

Coworker1: Yah well the two of us put ours up there and pretty soon there are seven of them now.
C2: I'm not sure what they are doing at night.
Me: Well when the daddy duck loves the mommy duck...
Posted by THOTpolice at 11:53 PM 1 comment:

There's a new sher...new kind of post-t notes. Looks like they are trying for more blue collar business. I was interested to see how they would do as an alternative to rite in the rain notebooks. 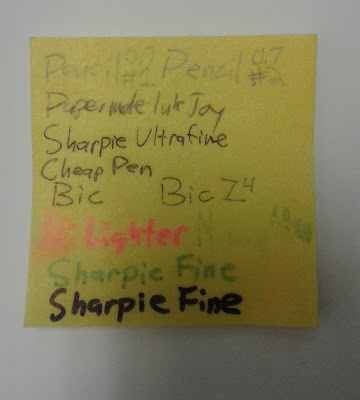 Pencils where disapointing. I used two different cheap 0.7 automatics. I didn't have a wood pencil handy and tried one later. (#2 HB)  It wrote similar to the second automatic.

Pens are good to go.

Dear FCC and whomever. Items used where purchased by the reviewer. Please apologize to the plants and trees for working hard to make the oxygen you are wasting.
Posted by THOTpolice at 11:10 PM No comments:

One of the perils of night shift work is having to do your grocery shopping late at night. Thank $diety there is a 24hr wallmart on the way home. As you can imagine I see plenty of oddballs. Tonight I spotted Tactical Tyrone. He was dressed all in black and tactical gear all over. Added large OFFICER patches both front and back. (not sneaking up on anyone now are you?) I strongly suspect Mr Tyrone is a bail bondsman. Also wasn't a costume since I"m guessing there was real armor to go with the baton and fire extinguisher sized mace. I've seen SWAT dudes roll lighter.

Not that big of a deal. Not worth mentioning except he had a single stack subcompact (Think it was a Taurus) in what looked like a level bajillion retention holster. The holster was probably three times the size of the gun and it had the pistol a good inch or two from his belt. Then I noticed he didn't have a magazine in the gun. *blink*

Mentioned it to him, he knew. *blink* *blink* *twitch*
Posted by THOTpolice at 10:37 PM No comments:

I suffered so you don't have to. 8+ pages of anti propaganda! My stance on the subject is pretty obvious. So was the PD's Supposed to be a big deal about bringing a large group of people together to see if civil discussion can be had. My conclusion:
"We just want to have a conversation" when they mean "You pro gun people need to shaddup and listen and give up your rights"

Hi-lights for you marking your bingo cards.

Anti gun cop featured.
frequent Columbine and school shooting references.
Racist cop acting badly story.
Anti supporting moderators hiding their motivations.
Every pro gun voice is wrong here is why. Pro gun side people's stories seem rewritten specifically to show they are wrong while the anti gun side's bios are clear.
Miss-idenified a Girandoni air rifle as a firearm
Miss-identifed a modern AR-15 complete with suppressor and grenade launcher as a 1950s Armalite AR-15
Doubt there was a single positive adverb for the pro gun side. Most pro gun statements where surrounded by negative slanted verbage.
Frequent NRA is evil/racist/ect. About the only positive NRA mention is that one person now realizes that NRA members don't like being called evil. (as the person prepares signs for an anti gun rally)
Refered to progun postings as "mainsplaining" and "lawyerly rat at tat tat of gun statistics"